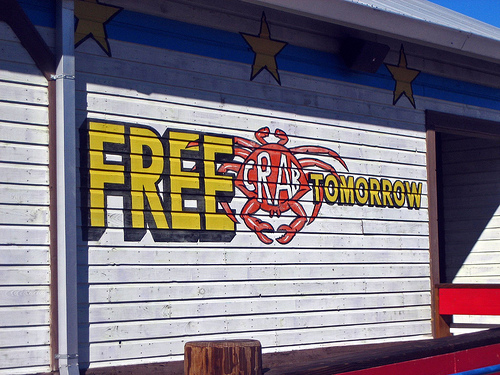 If you’ve ever been in or near a Joe’s Crab Shack restaurant then you know about the “Free Crab Tomorrow” ploy. Of course, it’s a humorous “promotional” for the company that “consumer protection advocates” have not yet become familiar with (we’re waiting for the first class-action lawsuit filed by the Federal Trade Commission demanding free crab be served per the advertising. OOPS! Don’t want to give bureaucrats any ideas regarding the raising of revenue.). For the uninitiated in the audience, the sign never changes. Every day the sign continues to read “Free Crab Tomorrow.” Tomorrow, of course, never comes. That’s the joke.

The Obama administration, always up for a good prank on the American electorate, has borrowed a page from Joe’s Crab Shack’s self-promotion handbook. Only they aren’t joking. In an article in Yahoo News from Reuters we are informed that “White House economists see jobs growth by spring.” In another article from the New York Times on January 11, 2009 in which it is claimed that “hundreds of thousands of jobs would be created during 2009.” The claim is also made that “…unemployment is still expected to rise but then fall late this year (2009)…” (emphasis added).

In the campaign, Mr. Obama vowed to create one million jobs, and after winning election he put forth a plan to create up to three million. The report now puts the figure at roughly 3.7 million, the midpoint of an estimated range of 3.3 million to 4.1 million jobs by the end of next year.

Oh, yes, the same article has an interesting reference to an Obama “middle-class tax-cut” that has long since fallen into the media memory hole-

Obama transition officials have said that the president-elect’s proposed middle-class tax cut — called “Making Work Pay,” which would provide $500 for individuals and $1,000 for couples by reducing payroll tax withholdings — is “nonnegotiable.”

What’s next? What new predictions will be made regarding the economy? When will small business get relief from the crushing costs of regulation and the cost of mandatory health care insurance? When will the federal government move to become the major stockholder on other corporations beside GM and Chrysler?

One thought on “Obama Administration Learns From Popular Seafood Company”