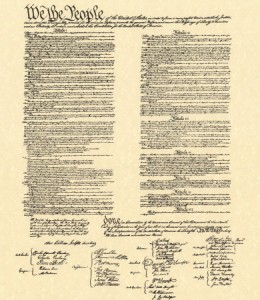 No person shall be…deprived of life, liberty, or property, without due process of law… (emphasis added) Amendment 5 US Constitution

That all men are by nature equally free and independent, and have certain inherent rights, of which, when they enter into a state of society, they cannot, by any compact, deprive or divest their posterity; namely, the enjoyment of life and liberty, with the means of acquiring and possessing property, and pursuing and obtaining happiness and safety… (emphasis added) Virginia Declaration of Rights, 1776

A story in the Detroit News, when read carefully, is an excellent indicator of the state of liberty at least in the state of Michigan. And as go the states so goes the Federal government. In the article we learn that local police departments are using virtually any excuse imaginable to impound privately owned automobiles. Pick a colleague up from a street who has dared to make “eye contact” with passers-by and you could lose your car- literally. No exaggeration necessary. According to the article…

State law allows police to take property, usually vehicles, for any reason, even in the absence of criminal activity

The person, houses, papers and possessions of every person shall be secure from
unreasonable searches and seizures. No warrant to search any place or to seize any person or
things shall issue without describing them, nor without probable cause, supported by oath or
affirmation

In light of the crystal clear language of the highest law of the land in Michigan, its constitution, it s almost impossible to imagine that any law enforcement official could be so jaded or corrupt as to describe any of the situations chronicled in the articles as “probable cause.”  And yet here we stand asking the question “what constitutes a “reasonable” seizure?”

It is difficult not to draw the conclusion that the real focus of Wayne County (Detroit) law enforcement’s  efforts have been directed not in protecting the rights and property of the citizens despite their oaths but in making sure they don’t illegally seize the property of people with the mindset and resources to bring suit on constitutional grounds against the law enforcement officers and agencies in question. Why should law enforcement go to the trouble, if this proposed line of thinking is true? Follow the money.

Once vehicles are “seized” (or if the Michigan Constitution is to be believed- stolen) victims are  required to pay $900 on top of towing and storage fees to get their often illegally seized property returned. This would be a tremendous boost to any county’s or municipality’s “ailing” budget.  Seize 100 cars on dubious grounds (say winking at an undercover cop working as a faux prostitute or perhaps demonstrating that you think law enforcement is “number one” with an inappropriate finger in the air) and VOILA! Ninety thousand dollars suddenly appears in the ailing government entities coffers.The current economic situation in many places is grim, no thanks to the frugality of  public servants, and the current attitude of government representatives and public safety servants has, in many cases, morphed from an attitude of servanthood to an attitude of the divine right of rulers in a remarkably short time. This is no idle speculation. The article contains a quote from Walter Epps, a candidate for Wayne County Sheriff. He said…

“Under the current ordinance, there doesn’t have to be a crime proven in order to seize someone’s vehicle,” said Walter Epps, a former Wayne County sheriff’s lieutenant who ran the department’s Morality Squad for more than four years. “But I feel if we’re going to take someone’s car, the least we should do is to charge them with the crime or issue them a ticket.”

The problem with this man’s statement is subtle. Did you catch it? It’s the sequence. Seize the car then to justify it charge the driver with a crime or issue a ticket. This, of course, is a clear indicator of the phenomena noted above. It is a tacit admission that law enforcement is ready , willing and able to make vehicle seizure appear to be justified by creating a charge or issuing a ticket as justification. But ask yourself a couple of questions. What ticketable offense justifies the seizure of personal property with the value of an automobile? How will this candidate’s solution fix the problem of illegal property seizure? Answer- It won’t. Putting a pig in a tuxedo doesn’t do anything except annoy the pig and ruin the tuxedo. But “public servants” will point to the “vast improvement” in the situation when it’s time for the re-election campaign and the media will dutifully report that the problem has been completely fixed, when in fact the situation is now worse. Not only will the poor former auto owner be stripped of his car but he will now be before a court on what may very well be a trumped up charge.

Within this framework it is easy to postulate that the practice of seizing personal property with little or no legal grounds has been a policy both developed and implemented by elected representatives with the understanding that the personal property of constitutional attorneys, state representatives or other prominent citizens who might have the clout to knock the gravy train off the rails would not be seized unless the case was blatant absolutely air tight. This is a clear indicator that the trend in government is to pretend that private property is actually a feudal holding. The true owner of all property, both real and personal, is the feudal baron (the state, county, city) while the citizen is a fief bound to the land and liable to will and whim of the baron. This is easily seen by examining the current reliance of counties and municipalities on the property tax. Under the current model of property ownership in most areas of the country ownership merely buys the right to pay rent to the local baron. If you think this is exaggerated then you can prove it to yourself by not paying your property taxes for a couple of years. An entity which can confiscate property for non-payment of any fee is the true owner of the property.

The only entity more powerful than the barons in a feudal society was the king, to whom all barons owed their loyalty as the one who granted all land holdings. The king was the original owner of all property, real or personal. In our analogy, the king is the Federal government and while it doesn’t have a role in this particular case (where is the Michigan ACLU screaming at the top of its lungs about the clear violation of the 4th and 5th amendments to the US Constitution in these seizure cases? The world wonders) it is not without “bloody hands” in the situation. The Federal government routinely steals personal property by “arresting” it and holding it often without charge or trial of the property’s owner, sometimes for decades. Occasionally, it secretly files for “forfeiture” and auctions or destroys the property without recourse to any legitimate criminal or civil action.

Until public servants are disabused of their recently acquired notions of being our rulers rather that our representatives and servants we will continue to suffer outrages like those chronicled here. There is only one way open to the Christian constitutionalist to disabuse them of this notion . Can you think what that might be?