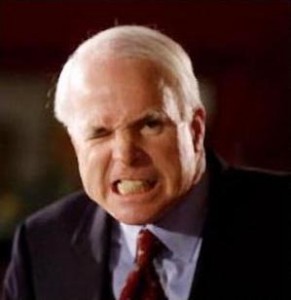 In an article in the Over The Counter Today blog we learned that Sen. John McCain has withdrawn all support of his own bill (S. 3002), the laughably misnamed Dietary Supplement Safety Act of 2010.

In effect this bill would have imposed draconian penalties for dietary supplement companies who made new products with recently uncovered ingredients if they weren’t marketed in the United States prior to the passage of the Dietary Supplement Health Education Act (Oct. 15, 1994). In other words, only drug companies would have access to ingredients that became available prior to nearly 16 years ago. If a company were to use one of these ingredients, the FDA would be empowered to call it “adulterated” and to order an instant recall. It also handed the Secretary of Health and Human Services the power to ban ingredients by simply striking them from a list called “Accepted Dietary Ingredients.”

It is clear that McCain is feeling the political heat. He is in a tense primary battle to keep his Arizona US Senate seat and apparently, enough of you have contacted his office and expressed your displeasure with this new power grab to give him the idea that maybe supplements ought to be left alone. This effort of McCain’s was really just one of the many steps the federal government is taking to turn control of all dietary supplements and pharmaceuticals over to the control of international “authorities” by adopting the European “Codex Alimentarius” as law in the United States. This essentially would place all regulation of supplements under the control of European bureaucrats who are themselves under the control of German Pharmaceutical giants.

McCain was convinced by both internal and external pressure to withdraw support for this bill. Your calls helped as did this letter from Sen. Orrin Hatch of Utah.

But we must be vigilant. Dietary supplements are in the cross hairs of regulators and the current administration. I was told at a meeting of Complementary and Alternative Medicine providers and patients last summer that the Obama health care bill would ensure the continuation of the easy availability of dietary supplements. This is an absurd notion. The European example tells a very different story. Dietary supplements throughout the EU are rapidly becoming an endangered species (except in the UK which doesn’t care for German control of ANYTHING).