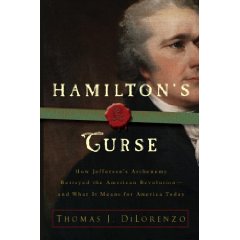 “Conservatives who genuinely believe in limited government are not generally exposed to the Hamilton who at the Constitutional Convention called for a king-like permanent president and who subsequently dedicated himself to undermining the limits on governmental power laid out in the very Constitution he championed in the Federalist Papers.”  This quote from page 171 of the book Hamilton’s Curse is a bit of an understatement, as most Americans, conservative and otherwise, are generally exposed to the results of Hamilton’s efforts in our government, our systems of education, business and finance, to name but a few.  The bowl of Hamilton’s poisoned fruit is spilling over with plenty.

As a matter of fact, the 1930’s saw the implementation of Hamiltonian ideology in a key area:  education.  Charles Beard, et.al., introduced the “economic basis” theory of government, which has since poisoned generations of students, policymakers and jurists with this pernicious theory.  This “economic basis” theorem is pure Hamiltonian, and is a consequence of the shift that happened in this country from 1913 onward (with the implementation of the income tax and the Federal Reserve laying the groundwork for a wholesale restructuring of our form of government.)

DiLorenzo lays out the case for the interface of big business interests supporting big government intervention programs (think the Bush/Obama “stimulus” packages and your on the right track); a laundry list of federal “welfare” to business interests that caps out at a neat $90 billion per year.  Other studies have shown it to be greater than that in some instances.

Couple this with a “justice” system at the federal level (Supreme Court) who from 1937-1995 couldn’t find a single piece of federal legislation to be unconstitutional, and you get the complete Hamiltonian package of an “energetic” government with the “fuel” of commercial interests to drive it onward.

This is an amazing record for a body that routinely passes unconstitutional legislation (and did during that period too).  The key to this amazing record is a wildly broad reading of the interstate commerce clause which basically posits that pretty much any form of human behavior has relationships to interstate commerce, and can therefore be regulated by federal statute.

So what are some of the fruits of this poisonous philosophy of “government uber alles?”  Here’s just a representative sample of the results:

–the use of federal grants to states as a control mechanism to kill states rights (think ‘highway funds’ or ‘crime prevention grants’ and you see the link);

–the use of the Incorporation doctrine (through the 14th Amendment) to apply the strictures on the federal government through the Bill of Rights to the states as a restriction on state sovereignty;

–adoption of the “higher law theory” of jurisprudence:  allowing the courts to sidestep the rules of the Constitution in order to apply novel legal (but extra-constitutional) theories;

–the use of executive orders by the President to control or seize power, thus allowing the Executive to act as dictator;

–manipulation of the monetary supply by the Federal Reserve in order to create economic instability as a precursor to radical shifts in power through legislative enactments;

–creating an international mercantilist empire, the needs of which lead to agressive expansions of military force and presence.

These are just some of the ways the fruit of Hamilton’s philosophy has ripened (and rotted on the vine).  Woods sums up the chapter’s theme:  “The final characteristic of empires, according to Morley, is that they are sold to the public in grandiose terms about spreading blessings for all mankind, when in reality their main purpose is to allow those who pull the strings of the empire to accumulate money and power.”

Hamilton would be proud of seeing the modern results of his efforts.