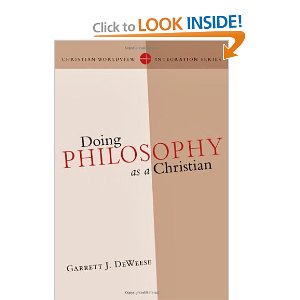 Doing philosophy as a Christian may sound to many like a self-contradictory statement.  How can philosophy and Christianity relate to one another or as Tertullian put it, “What has Athens to do with Jerusalem?”  Well, Garrett DeWeese would say, “a great deal.”  In this newest book in the Christian Worldview and Integration Series by InterVarsity Press, DeWeese undertakes the enormous endeavor to present an apologetic for philosophy from a Christian vantage point and argues how Christianity brings something unique to the formal practices of philosophy.

The introductory chapter establishes the framework of the book emphasizing the desire to think about philosophy within a Christian framework and present a way Christian philosophy might be done.  Subsequent to the introductory chapter he divides his book into four sections.  The first part is exceptional with three chapters on philosophy and the Christian faith.  The first is this reviewer’s favorite chapter of the book as it deals with various aspects of philosophy as wisdom, the Biblical understanding of wisdom and relates these to living the good life.  The next chapter is a concise thorough discussion of the classical question of the relationship of faith to reason.  He summarizes and critiques fideism then places faith and reason in a complimentary relationship emphasizing that “philosophy and theology are not mutually exclusive disciplines, but rather mutually necessary for moving toward comprehensive knowledge” (85).  In this chapter DeWeese comes across as very sympathetic to a presuppositional or systems approach to philosophy.  After the chapter on faith and reason is an intriguing insightful chapter on Jesus as a philosopher.  Of course he concludes that Jesus is not a philosopher but he argues that Jesus has much to do with philosophy.  Most of this chapter defends the authority of Jesus.  He states that “Jesus is Lord … has implications for how we do philosophy….Jesus is credible, and that credibility is pervasive: Jesus should be trusted in all matters not just when he preaches” (91).  These three chapters in the second part are valuable, topical and not necessarily dependent on one another.

The next section examines three broad traditional areas of philosophy: metaphysics, epistemology and ethics.  Each chapter provides a clear solid overview of each subject and for the person unfamiliar with these philosophical subject matters then these are a good introduction.  He provides a variety of non-Christian explanations along with a Christian critique of each area.  The section on metaphysics, universals and particulars is a vibrant presentation of a difficult topic.   While this section is well done it seems directed toward the novice philosopher.  All three of these chapters provide clear summaries of the topics and the first two present a solid Christian response of metaphysics and epistemology.  I found the section on aesthetics and ethics good summaries of the topic but found myself looking for further explanation of what the Christian belief in aesthetics or ethics entails.

The third part covers what he calls second-order questions.  He selectively chooses to cover the areas of Philosophy of Mind and the issue of Philosophy of Science.  He discusses each from a Christian worldview.  Both are fine chapters but it’s a bit puzzling why these topics were chosen for further discussion.   The only explanation seems to be because DeWeese finds himself most knowledgeable and thus comfortable with these two topics. They aptly show the application of Christian philosophy to these two topics but I was unsure of their necessary inclusion in the book.   This section shows some of the great range of philosophy and how Christians can approach a couple of these specific topics.  While the previous section was directed more towards those with little philosophical expertise, this section was designed for those who are seeking deeper philosophical insight.

In the book’s final chapter DeWeese applies philosophy to spiritual formation seeing the intellectual exercise of philosophy as a discipline which could best be done as a Christian.  This part attempts to unite the transforming of the soul linked to doing philosophy and thus to the concept of spiritual formation defined as sanctification.   DeWeese wants to show in this chapter that philosophy only really has value as it actually affects life and thus must be Christian.  Christian thinking is part of sanctification.  A good Christian view is one that transforms lives and is true because it conforms to reality more than other views.  He writes, “Clearly something hasn’t been going right in much of the church; progress toward holiness and righteousness—progressive sanctification—is often hard to spot.  If philosophical thought can help illuminate the mental processes involved in forming intentions and resolutions and acting on them, then perhaps it can also contribute to understanding and strengthening the process of spiritual formation” (322).

One should not overlook a wonderful preface by Francis Beckwith and J.P. Moreland where they focus on the necessity of viewing life wholistically with an emphasis on integration meaning integration of the Faith with all academic and life areas.  They provide seven reasons why integration matters and the rejection of compartmentalization with a view that discipleship demands integration and a rejection of the sacred versus secular dichotomy.   The self-proclaimed thesis of the book is “that there is something distinctive about how a Christian should do philosophy” (33).   It certainly achieves this purpose.