This has become a foreign notion to people who aren’t taught the Constitution in school or in college. This is, sad to report, most people in the United States today. This constitutional ignorance has a two-fold effect; it paralyzes the citizen confronted with a question of constitutional interpretation and it gives government employees and agencies a status as “experts” that is neither correct or deserved. This “expert” status gives them a free hand to make some of the most outrageous claims regarding their power and authority. It enables them to spuriously cite constitutional passages and claim that the text gives them powers that were never delegated to the federal government. And who will stop them? Constitutionally there are checks to federal power. But those checks require an informed populace. So how can one become informed?

The example used in the class is a recent article in the Transportation Safety Administration’s (TSA) blog. As background, the state of Texas is working on legislation that would outlaw the current use of “enhanced patdowns (in reality merely randomly administered obscene groping)” by TSA screeners at airports inside Texas. The blog article starts with a bold claim about Article VI of the US Constitution, often called the “Supremacy Clause”

What should a citizen who cares about his liberty do about a situation where someone or some agency who purports himself/itself to be an an expert has made a claim regarding his or the agencies powers under the Constitution? Is There some methodical way to examine the claim to determine whether or not the claim is valid or merely an attempt to sandbag the citizen by boldly bluffing regarding the extent of the person or agency’s powers?

Yes there is a method that is really rather straight forward and requires nothing more than the ability to read and reason. 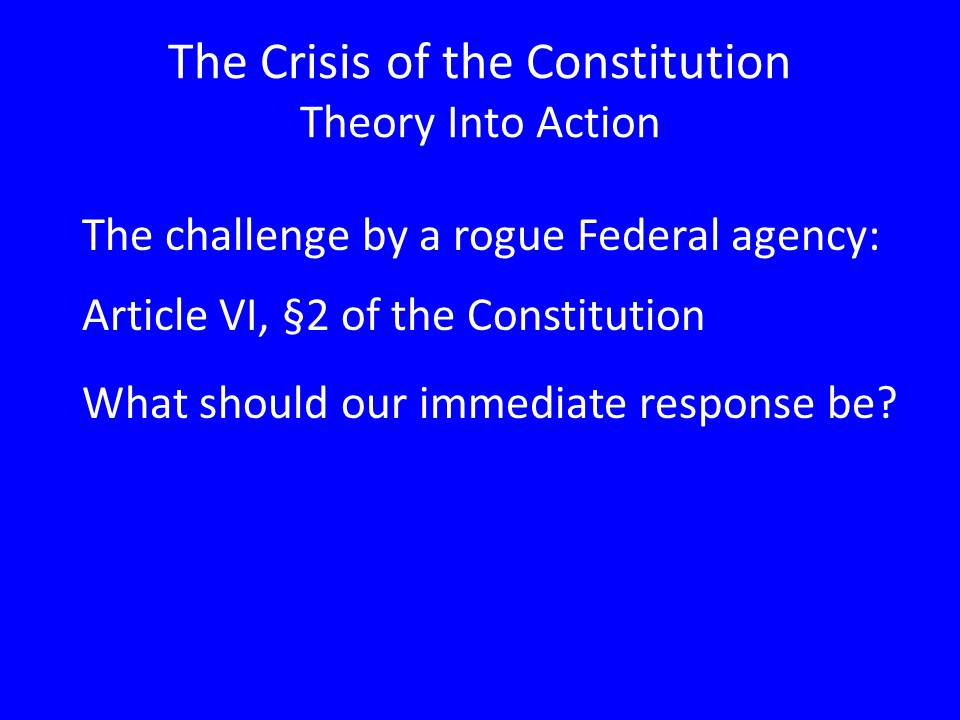 We have already seen the challenge. It is an assertion (offered with no proof) that Article VI, §2 “keeps the states from regulating the federal government.” So, what should the first step be? 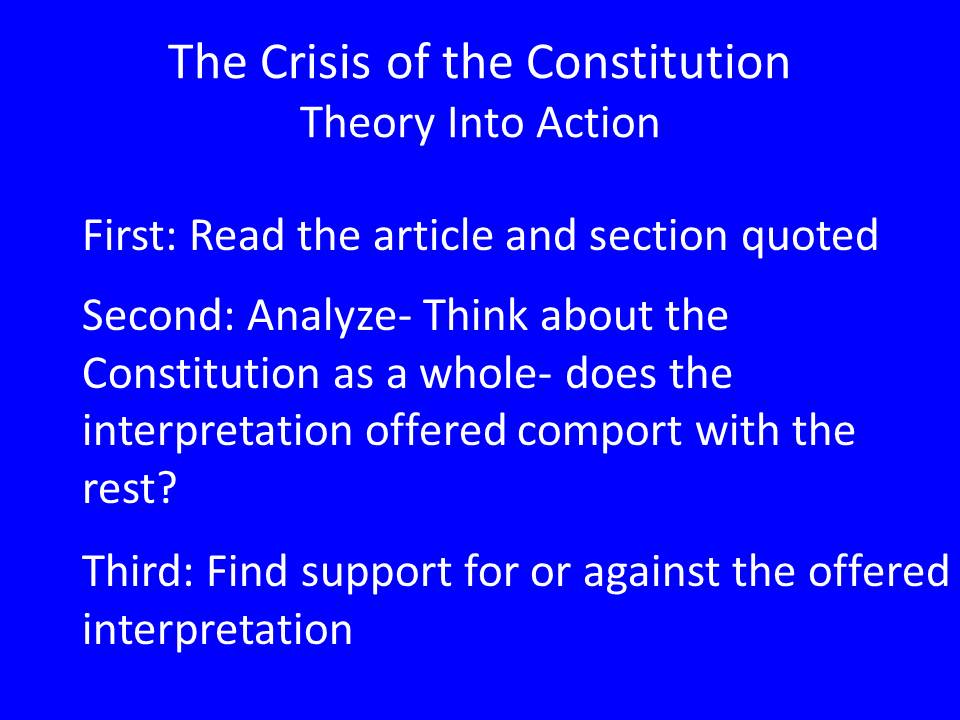 OK, a careless reading of the article and section could lead one to conclude that all laws made by the federal government were the supreme law with no recourse to local law or courts for relief. But is that all the effort we should put into the analysis? No. A little closer reading shows that there is a limiting factor to the “supremacy clause.” Look closely and find what it is. Do you see it? That limiting factor is one of the most important things you can know as a citizen- the Constitution itself. Look at the first clause of the first sentence- “This Constitution, and the Laws of the United States which shall be made in Pursuance thereof.” That is a key part of the section of the Constitution in question. It raises the question “is the TSA’s action being done in pursuance of the remainder of the Constitution? If not then what of the TSA’s claim? The Constitution itself tells us that

The powers not delegated to the United States by the Constitution, nor prohibited by it to the States, are reserved to the States respectively, or to the people- Amendment 10

So, from the Constitution itself, we know that if the TSA is operating outside the powers delegated by the states and the people to the federal government then their activities are illegal. But our analysis is not yet complete. The enumerated powers of Article II, §8 gives the federal government the power to regulate interstate commerce. Regulate here means “To adjust by rule, method or established mode;…To put in good order;…To subject to rules or restrictions;” 1 So we see that the federal government has the right to regulate interstate commerce, which covers most flights in the state of Texas- but certainly not all. Now we must ask if that power is absolute, and if not what are its limits? A quick glance at the 4th amendment gives us the answer

The right of the people to be secure in their persons, houses, papers, and effects, against unreasonable searches and seizures, shall not be violated, and no Warrants shall issue, but upon probable cause, supported by Oath or affirmation, and particularly describing the place to be searched, and the persons or things to be seized.

Is a feel-up by a TSA screener as a condition of flying a reasonable search, especially considering the burden of proof and other conditions required by the amendment for the issuance of a search warrant? Arguably the answer is a hearty NO! So, now what? 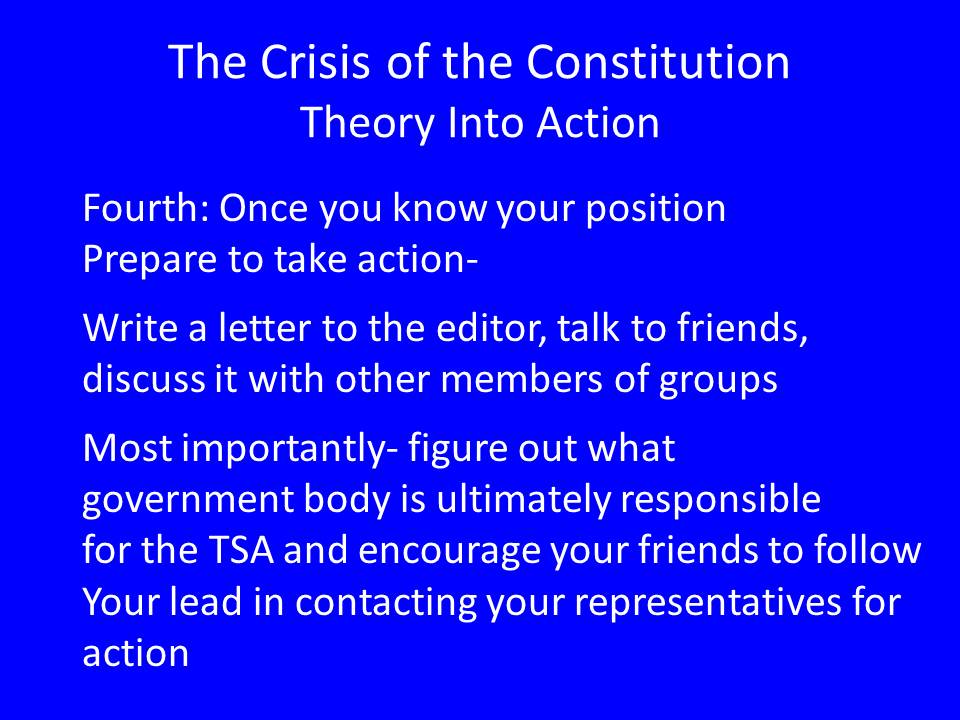 One of the burdens of knowing what to do is the responsibility to do it. The slide is a suggestion for the action you can take once your analysis is complete.

One of the major issues we face is paralysis in the face of the challenges from out of control agencies like the TSA. This has prompted some with a weak understanding of the details of the Constitutional Convention or conventions in general to claim that we can cure the ills of the American Republic with a new constitutional convention. They are under the wildly irrational notion that men and women who willfully violate and ignore the Constitution we have will somehow fall into line and obey a new one to the letter.

What’s clear from this exercise, which is simply one of a nearly endless supply of constitutional violations from which to choose, is that the Constitution is viewed as mere formality to be avoided or reinterpreted to fit the needs of those wielding power. Before we roll a pair of loaded dice with a new convention, let’s try using the Constitution we have as it was intended to work.